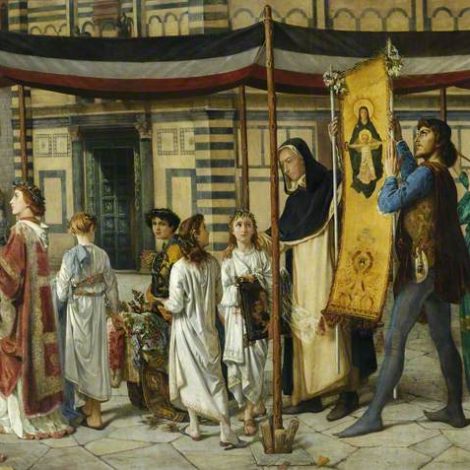 purchased as a ‘good example of a woman’s work’

Hanging on the east wall of the Great Hall, ‘A Florentine Procession’ is a memorable feature for all who spend time at Homerton.

‘A Florentine Procession’ hangs on the east wall of the Great Hall, the most remarkable painting in the College’s art Collection. The painting shows the ‘Collection of Diverse Objects for the Burning of the Vanities’, in medieval Florence. Under the influence of the notorious priest Savonarola, the citizens were urged to rid themselves of worldly fripperies and vanities, and consign them to the flames.

The procession is depicted in a theatrical way, with a flowing line between the individual elements. Beginning with the tall gamblers on the far left, the line drops to the height of the children collecting jewellery and other vanities, then, following the gaze of two of the girls, it rises to the golden banner of Christ, the highest element, then falling and rising once again to the women musicians and city elders completing the procession. This flowing line is set against the regularity of the walls forming the background to the work, and the irregular paving stones beneath. All this is sectionalised by the upright supports to the overarching canopy.

The painting was created by Jane Benham Hay, largely unknown today, but celebrated when the work was exhibited in London in 1867. ‘A Florentine Procession’ won the accolade of ‘Picture of the Year’ in the Saturday Review. In 1902 the painting was purchased for Homerton College by Principal Horobin, as a ‘good example of a woman’s work’, to educate the students, recently all-female, and in the new location in Cambridge. While Principal Horobin may have considered the painting to be a good moral lesson to those young women giving too much attention to personal adornment, their reaction may have been tempered by the knowledge that Savonarola’s downfall would arrive shortly after this event.

The painting has twice been restored following water damage – one a major restoration in the 1990s, and the second following a major storm in August 2016. Now returned, the painting continues to serve as a key feature of the Great Hall, and one of the most memorable artworks in College.