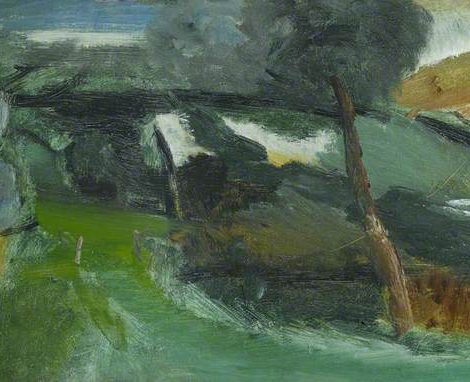 Hanging in the Macaulay Room, a vivid painting by a highly regarded English painter of the twentieth century.

Ivon Hitchens (1873-1979) was a twentieth century painter who was particularly noted for his landscape works. His father was an artist and as a child Ivon Hitchens posed for his father’s paintings, memorably aged one as the infant Jesus. He went to school in Folkestone, Kent, and later to Bedales School in Hampshire, thus getting to know the Sussex and Hampshire downland that would later prove a major inspiration in his work. From 1912-16 and 1918-19 he studied at the Royal Academy Schools where he was taught by the artists Sir William Orpen, John Singer Sargent and George Clausen.

In London in the 1920s and 1930s he had a number of successful exhibitions and was elected to the  ‘Seven and Five’ Society, whose membership included many influential modern artists such as Henry Moore, Barbara Hepworth, David Jones, John Piper and Ben Nichsolson. In 1940, his house was bombed, so Hitchens and his family moved to a caravan in Petworth, West Sussex. Here the South Downs became the inspiration for many of his works, and Hitchens became well known for his panoramic landscape works created from blocks of colour.

Hitchens’s personal view of landscape might remind us of other painters who stood aside from mainstream traditions to develop their own vision; they might be labelled ‘romantic’, but their compositions are carefully organised and controlled.

John Ball, writing in Homerton: The Evolution of a Cambridge College (2010)

One of these landscapes, Damp Forest Walk, now hangs in Homerton College’s Macaulay Room. The woodland scene is abstract with broad brushstrokes conveying an impression of great depth, enhanced by lines which draw the eye to a focal point in the distance and rich, woodland colours. Hitchens’s landscapes are highly regarded in English painting and more of his work can be seen on the Tate Gallery website.

This painting was purchased for Homerton College by the Trustees in 1990, and remains a well-loved part of the College art collection.