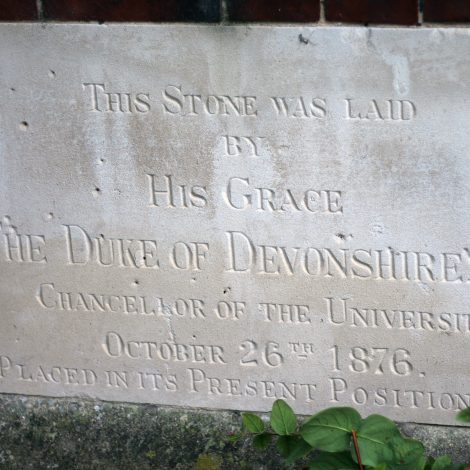 In an attempt to attract more students, the Great Hall was built in 1889.

On the external wall of the Cavendish Rooms, the Foundation Stone of Cavendish College can be seen.

This stone was laid by His Grace, the Duke of Devonshire K.G., Chancellor of the University.

Placed in its present position 1889

Cavendish College was founded in 1876, imagined as a way for poorer students to achieve a university education. Joseph Lloyd Brereton, a Norfolk clergyman, hoped to follow the county school system, where younger students could work towards a ‘County Degree’, followed by a Bachelor of Arts at the University of Cambridge. However, Brereton was known for grand plans which often failed, often due to a lack of financial stability, and this was to be the case for Cavendish College.

Land was bought from Trinity College, in what was then a remote location – in fact, the buildings of Cavendish College were the first development in the area. While a detailed and impressive design had been drawn up, a lack of funds meant that the first stage of building was not as grand, and lacked important elements, such as a Hall. The College opened in 1876, marked by this foundation stone which was laid by William Cavendish, 7th Duke of Devonshire and Chancellor of the University. As the largest shareholder in the project, Cavendish was also the namesake of the College.

Cavendish College was plagued by financial problems from the start, both through Brereton’s poor managing and an inability to attract enough students. In an attempt to encourage more students, further buildings were created in stages, including the Great Hall, built in 1889. The foundation stone was at that point moved to the external wall, where it is still visible today . Even with such an impressive addition to the College, the attempt to attract new students failed, and the College closed in 1892. It was later sold to Homerton College, at that time in London, and 1894 saw the opening of Homerton New College, at Cavendish College, Cambridge. This name was later changed to Homerton College, Cambridge, and we are now nearing the 125th anniversary of Homerton’s presence in Cambridge.