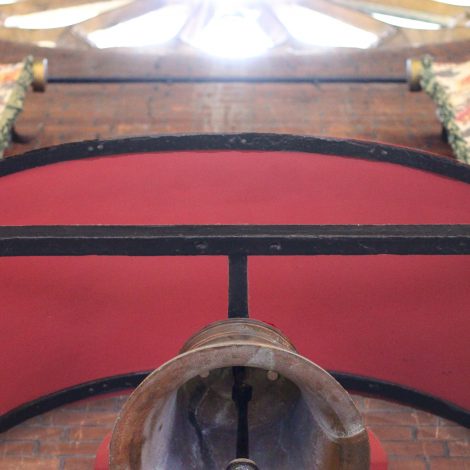 People on Hills Road would check their watches by the Homerton bell.

Rung to begin formal dinners and events, the bell has always been a symbol of college life.

Situated on the south wall of the Great Hall, alongside the rose window and the Roll of Principals, the bell is a key focal point of the room. Today it is rung each week before Formal Hall, and also marks the beginning of other formal dinners, such as the Charter Dinner.

What most people don’t know is that the bell is named ‘Big’, or anything of its history. The bell was created by Warner’s of Whitechapel in 1889, the year in which the Great Hall was built. In 1889, Homerton College was still in Homerton, East London, and on the Cambridge site it would move to a few years later was a struggling institution called Cavendish College. Building the Great Hall was a despairing attempt to make Cavendish College feel more collegiate in the hope that this would attract more students.

This did not work as hoped and Cavendish College closed in 1891. When the thriving Homerton College moved into its vacant buildings, the bell was hung outside the hall on the northwest corner. It was rung to announce the three meals of the day, and the ringing of the bell was a part of the students’ duties. This worked so well, and the bell was rung so punctually, that people on Hills Road would check their watches by the Homerton bell!

Eventually the bell fell into disuse, and after many years, with the help of donations, it was restored and rehung in its present location. Following this restoration, in the early 1990s, the bell has become an integral part of College life.