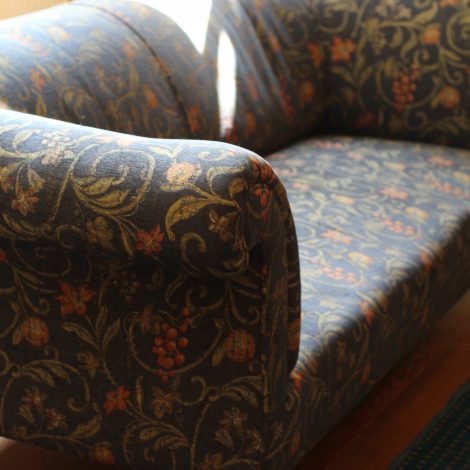 While the conversations may have been cringingly stilted, meetings on this settee must have been memorable…

Now inconspicuous in the Macaulay room the long settee, once partly hidden by a screen where hapless men were entertained to tea.

In the days when Homerton was all-female and when most of the Cambridge Colleges were all-male, access between the two was very strictly regulated. In the early days men were not allowed on Homerton premises, but after the First World War they were permitted in the Drawing Room ‘under special conditions by permission of the Principal.’ As a consequence the Drawing Room became a hallowed place; indeed we have as many post-card photographs of it as we have of the Hall in the Archives. Furnished as a large middle-class family drawing room would have been, with cane chairs, tables and a large fireplace, at the back of the room stood a long settee partly hidden by a screen. Here hapless men were entertained to tea (in the presence of a female staff chaperone, of course) – a function belied by the settee’s current, inconspicuous position in the Macaulay room.

These encounters were arranged during fleeting meetings at church, or College chapels on a Sunday; it was not until much later that trips to the theatre and cinema were permitted. While the conversations may have been cringingly stilted, meetings on this settee must have been memorable, and many men bravely persevered through the awkward conditions in the hope of their affections being returned. We know that in the inter-war years, many proposals of marriage were made on this settee – although not all of them were accepted!