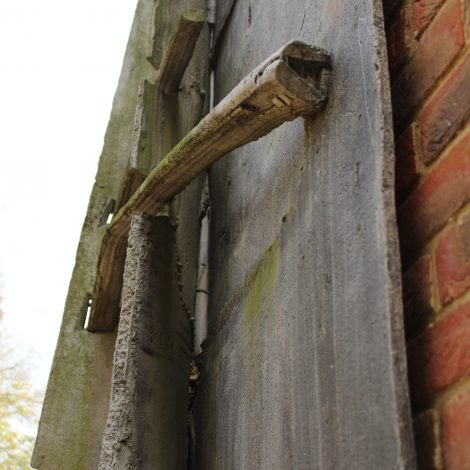 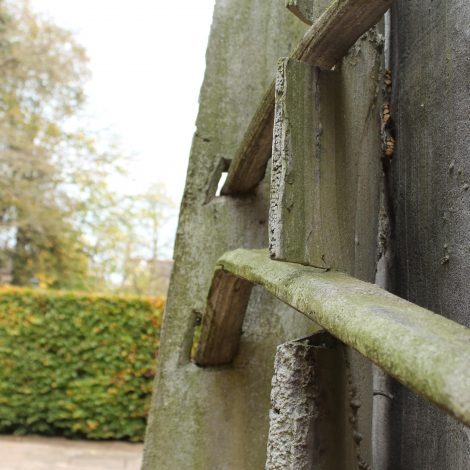 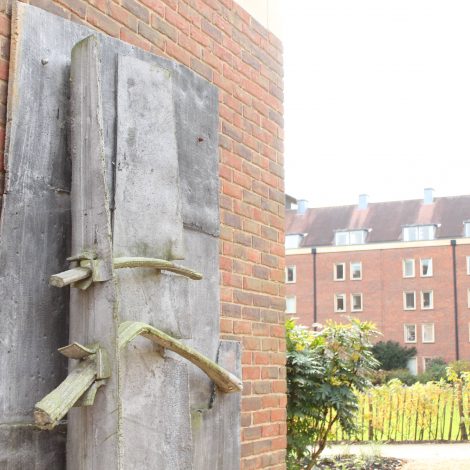 Until October 2017, it was the only ‘monumental visual statement in the College’

On the wall of the Mary Allan Building, opposite Queen’s Wing, is an arresting sculpture. Until October 2017, this was the only ‘monumental visual statement in the College’ (John Ball, 2010). This unnamed sculpture was created by Geoffrey Clarke, who is perhaps best known for his work for Coventry Cathedral, and generously donated to Homerton College in 1961 by Dr Roger Pilkington, Chair of Trustees.

Cast in aluminium, using Clarke’s innovative method of creating moulds from polystyrene, the piece utilises technologies which were only recently available at the time of its creation. It was originally hung on the Black and White Buildings, between the old Library and science block. However, in 1997, the Black and White Buildings were demolished, so the sculpture was moved to the newly built Mary Allan Building, it’s present location.

Just across the lawn, this sculpture has recently been joined by Locking Piece, a work by Henry Moore, which has been generously loaned to Homerton College by the Henry Moore Foundation.

Clarke has been described as ‘artist, spiritual thinker, engineer’, but though his skill as a worker in metal is manifest, his spiritual thinking is difficult to discover; the work seems to be symbolic, but its meaning is personal and opaque to the viewer. We therefore need to accept it as not necessarily having reference beyond itself, but as an abstract statement of shape. We bring to it our own perceptions of a harmonious construct of vertical channels penetrated by horizontal shafts.

John Ball, writing in Homerton: The Evolution of a Cambridge College (2010)