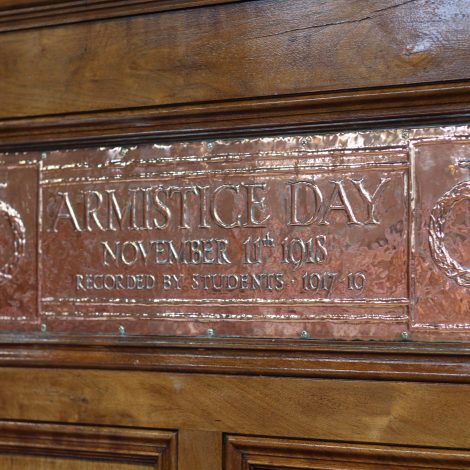 At 11am on November 11th, the sun will shine through the windows of the Hall and onto the plaque.

At the kitchen end of the Great Hall, underneath the portrait of former Principal Dame Beryl Paston Brown, a copper plaque is inlaid in the wooden panelling. This is Homerton’s memorial to the end of the First World War. It reads: Armistice Day – November 11th, 1918 – Recorded by Students 1917-1919. On either side of the text there is a conventional symbol combining a laurel wreath and a downturned sword, the first representing victory, the second peace.

At many other Cambridge Colleges, First World War memorials list the men who died as soldiers. As a training institution for female teachers, Homerton College’s commitment was different.  With so many men recruited to the war, the training of women teachers was extremely important and the College also took advantage of its large grounds by growing sorely needed fresh fruit and vegetables. The plaque commemorating the end of the war on November 11th is specifically placed so that at 11am on that day the sun will shine through the windows of the Hall and illuminate the plaque.