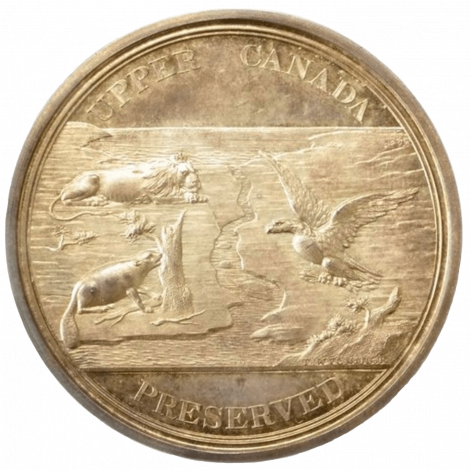 Dr Christopher Brooke’s commemorative Canadian war medal is full of imagery relating to the political thought of the time.

The image is of a medal struck by the Loyal and Patriotic Society of Upper Canada to commemorate the Anglo-American War of 1812, which shows the American eagle menacing the pacific Canadian beaver across the Niagara River with the English lion—watchful? resting?—offering protection to the beaver, somewhat at a distance. My interest in this image concerns the place of beavers in the political thought of the time—not so much to symbolise Canada, but rather to symbolise the distinctive combination of rationality, sociability, and industry that beavers were persistently held to embody. Mention is occasionally made in the literature of the period of the ‘republic of beavers’, and the trope is a significant one, insofar as so much political thinking turns on trying to think about human sociability in the right kind of way, such that time spent thinking about how human beings are like or unlike beavers is never time wasted; and a short history of the république des castors is likely to be a by-product of my current research.

My research covers a broad range of topics in the history of modern European political thought, from the 1580s down to the present. My major recent publication is a new edition of Thomas Hobbes’s Leviathan (1651) for Penguin Classics, and my major work-in-progress is a study of the history of distributive political theory since 1699, which will be followed by a general history of political thought covering the span 1794-1848.

Dr Christopher Brooke joined the Fellowship at Homerton College in 2014, and is Director of Studies in Politics. He is a University Senior Lecturer in the Department of Politics and International Studies, and a regular member of the Talking Politics podcast.