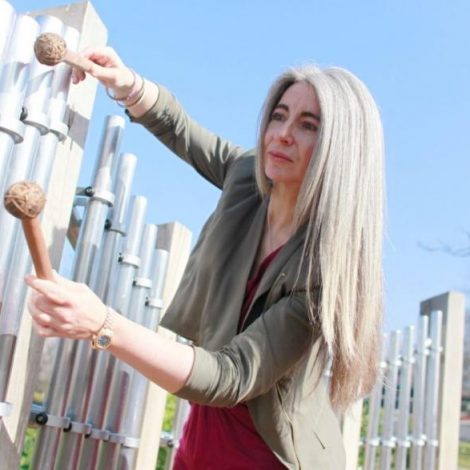 It was an inexplicable feeling but as soon as I saw the percussion section I knew this was the family I belonged to.

Evelyn Glennie is the first person in history to successfully create and sustain a full-time career as a solo percussionist.

“My first experience with percussion was seeing and being inspired by my school orchestra at the age of 12. I knew I needed something else to go alongside my piano playing, which was my main instrument at the time. It was an inexplicable feeling but as soon as I saw the percussion section I knew this was the family I belonged to”.

Evelyn Glennie is the first person in history to successfully create and sustain a full-time career as a solo percussionist, performing worldwide with the greatest conductors, orchestras, and artists. She fondly recalls having played the first percussion concerto in the history of The Proms at the Albert Hall in 1992, and had the honour of a leading role in the Opening Ceremony of the London 2012 Olympic Games.

Evelyn’s solo recordings, which now exceed 30 CDs, are as diverse as her career on-stage. ‘Shadow Behind the Iron Sun’ and ‘Sound Spirits’ continue to be bestselling albums that amply demonstrate her brilliant improvisational skills. A double GRAMMY award winner and BAFTA nominee, Evelyn is also in demand as a composer and records high quality music for film, television and music library companies.

As well as her own compositions, Evelyn is a leading commissioner of new works for solo percussion, with more than 200 pieces to her name from many of the world’s most eminent composers. She believes this has been crucial to her success as a solo percussionist. To this day, Dame Evelyn continues to invest in realising her vision – to Teach the World to Listen – “to improve communication and social cohesion by encouraging everyone to discover new ways of listening. We want to inspire, to create, to engage and to empower”.

Awarded an Honorary Doctorate in Music by the University of Cambridge in 2010, Evelyn joined Homerton’s Honorary Fellows in 2016. She also received a DBE in 2007, and was appointed to the Order of the Companions of Honour (CH) in the 2017 New Year Honours, recognising outstanding achievement in the arts, literature, music, science, politics, industry or religion. We look forward to welcoming Evelyn back to Homerton as part of Homerton 250, particularly for our celebrations on 27 October 2018.