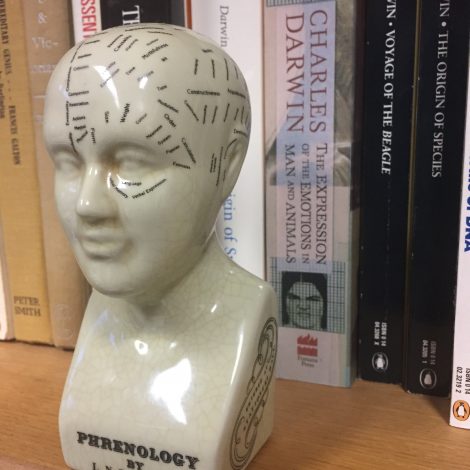 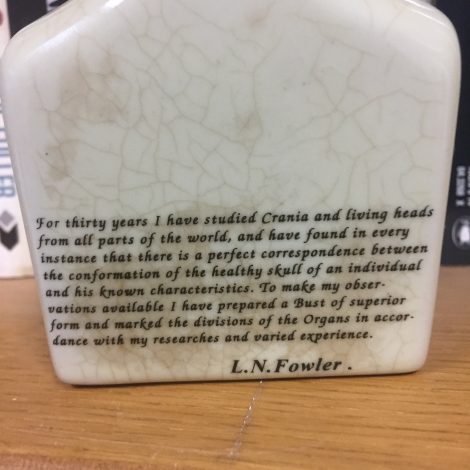 ‘elements of these psychological investigations were brought into literature’

David Clifford explains how both developing scientific discovery and popular culture can at the same time influence contemporary literature.

These images show a phrenology bust by L. N. Fowler, one of the leading phrenologists of the nineteenth century.

In the 1820s phrenology was wildly fashionable: it had approximately the same status as the Myers-Briggs type indicator in the late twentieth-century. Particularly popular in Great Britain and the United States, it emphasised the correlation between the physical qualities of a person and their personality, so, for example, a bump on the forehead above the left eye might indicate a propensity to mirthfulness. But, popular though this idea was, it was hugely controversial in challenging the well rooted belief that the soul was its own unique entity, and proponents of phrenology were viewed as near-heretics. By the 1850s, a new generation was much more comfortable with the idea of the mind or soul inhabiting our physical bodies.

Why am I interested in this as an English Literature specialist? The literature of George Eliot, George Meredith, Thomas Hardy, and others took elements of these psychological investigations into literature and can be seen to have influenced Sigmund Freud. My research interests include the cognitive abilities of humans as opposed to primates (I’m not a fan of human exceptionalism). The bust shows how the literature of the day reflected changing scientific understanding of the way we see humans.

Dr David Clifford joined Homerton College as a Fellow in 2002, and is Director of Studies for English (Part II).