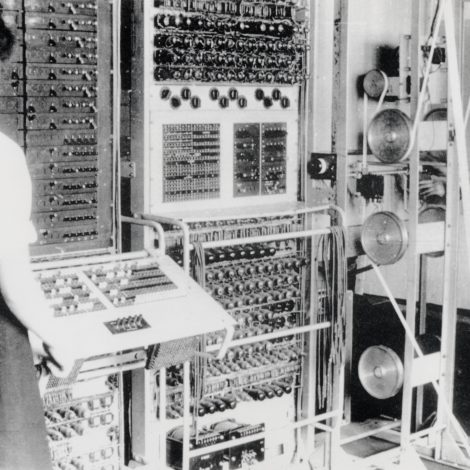 Due to her oath under the Official Secrets Act, few knew about her top secret past…

Senior Lecturer and Warden-Tutor at Homerton 1966-83, Mary Barbara Wallis had a surprising back-story.

‘Mary Barbara Wallis would always sail past as I looked for my mail in the pigeon holes by the main door before breakfast, or on the way to my first lecture of the morning. I say sail because she always struck me as a WREN (nickname for those in the Women’s Royal Naval Service) with her 1940’s style, smart navy suits and sensible shoes. I only had to speak to her once, when she became aware that my room-mate and I had not been able to feed the gas meter in our room in Blinco Grove. She dealt with an embarrassing situation with such tact, that looking back, I am very grateful for her Warden-Tutor skills.’

Before she arrived at Homerton College, Mary Barbara Wallis had studied Modern and Medieval Languages at Girton College, Cambridge, matriculating in 1941. At the end of her first year, however, she was called up to the Auxiliary Territorial Service, the women’s branch of the British Army, and spent 1942-45 working at Bletchley Park, the top secret site of Britain’s codebreakers during the Second World War. Wallis had an excellent understanding of the German language, enabling her to pin down troop movements by tuning into German transmissions. She also linked tapes from the Enigma machine to her audio receptions, pointing out pieces that included critical information.

Wallis returned to Girton to finish her studies in 1946, focusing now on Anthropology and Archaeology, but not before spending some time working as a translator at the war crime trials at Nuremburg in Germany. After Cambridge, she taught in Bethnal Green in the East End of London and then worked as a child-care officer in Reading. That comparatively quiet life came to and end when the Hungarian Uprising of 1956 drove Hungarian military personnel to seek refuge in Britain, and Mary Barbara Wallis became involved in arranging accommodation for them.

1956 was a busy year for Wallis. She next took up a British Council post as the head of Victoria College in Cairo, only to be imprisoned and then expelled from Egypt due to the Suez Crisis. Shortly after this she returned to North Africa, as Senior Mistress at Tripoli College in Libya. After six years here she returned to the United Kingdom, joining Leeds University as a Nuffield Research Fellow, before taking her post at Homerton College, as Senior Lecturer and Warden-Tutor, in 1966. Due to her oath under the Official Secrets Act, few knew about her top secret past, but in her role as Warden-Tutor Mary Barbara Wallis touched the lives of many Homerton College students.