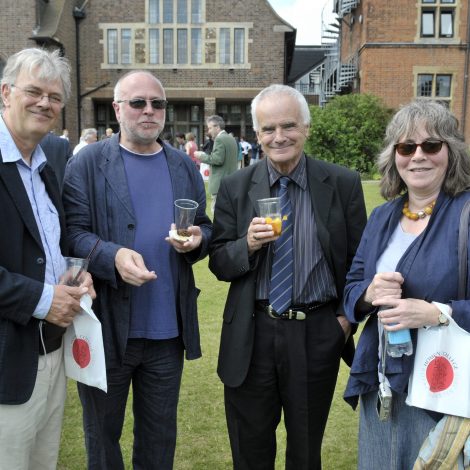 One of Max’s first acts as Honorary Fellow was to set the poem Homerton to music for the Charter Choir.

Composer Peter Maxwell Davies was an Honorary Fellow at Homerton College from 2009 to his death in 2016. He is here remembered by John Hopkins.

Peter Maxwell Davies, known as Max, was Master of the Queen’s Music from 2004 until 2014, the first to hold the post for a stipulated 10-year period. He became an Honorary Fellow of Homerton College in 2009, being sworn in on the same day he was awarded an Honorary Doctorate of Music by Cambridge University.

Peter Maxwell Davies’ compositions include orchestral works, numerous concertos, operas, choral and chamber music. His iconoclastic works of music-theatre, such as Eight Songs for a Mad King, saw Max rise to fame in the 1960s. His career also saw a steady output of pieces in more traditional genres, following the unexpected appearance of a Symphony (now no. 1 of 10) in 1978. This was unusual at a time when no self-respecting modernist composer tackled such backwards-looking forms.

Always active in practical ways, Max conducted his own group, The Fires of London, for many years. He later became Associate Composer/Conductor with the Royal Philharmonic and the BBC Philharmonic Orchestras. From 1979 to 1984 he was Artistic Director of the Dartington Summer School of Music, where he also taught composition. From the mid-1970s, Max lived mainly in the Orkney Islands, where he founded the St. Magnus Festival in 1977.

In politics, Max was a staunch socialist, though these views didn’t prevent his outspoken criticism of the Blair and Brown Labour governments. In particular he famously described the Iraq War as the worst foreign policy mistake since the Crusades. He was also a strong supporter of music education, which he believed to be a right for all children and that he saw, as many would agree, as threatened by government policies from the Thatcher years onwards.

When Max became an Honorary Fellow of Homerton in 2009, the College was preparing to take up its status as a full college of Cambridge University. For this occasion, Poet Laureate and Honorary Fellow Carol Ann Duffy wrote the poem Homerton. Therefore, one of Max’s first acts as Honorary Fellow was to set this to music for the Charter Choir. It was premiered in 2010, and was recorded on the Charter Choir’s debut CD, Audite Finem, in 2014.