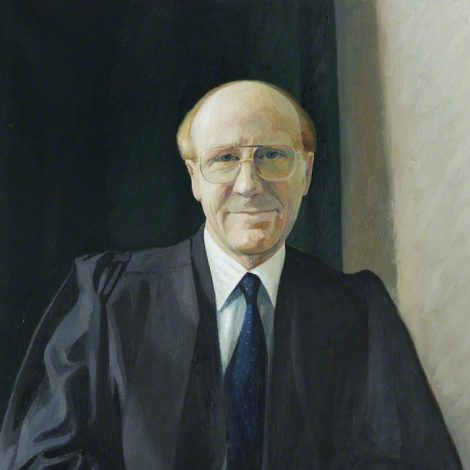 He whispered to his wife, “You go in first!”

Philip Rundall was a key member of the art department from 1973-98, and is now a Retired Senior Member. Here Philip remembers painting the portrait for Principal Alan Bamford.

Normally I would paint with the sitter in front of me. Alan, however, was not a well man and he suffered back problems on top of everything else. So I ended up having several photo sessions before feeling ready to paint. During these sessions Alan often spoke about his life before Homerton. I think he expected Cambridge to be a much easier experience than it proved to be, a calmer end to a long career.

The canvas, a beautiful surface to work on, was made especially for me by the good folk at the Trumpington Gallery. I proceeded to build up the picture in oil paint, surrounded by post cards and reproductions of paintings to remind me that a painting is a collection of marks on a flat surface. The last thing I wanted was the portrait to look just like a photograph. In particular I found Cezanne helpful, especially the way in which he uses colour: warm colours advancing, cold colours receding. The linear element is also very apparent in his portaits, creating flowing edges to forms. These things and more made me think in terms of constructing a picture rather than merely achieving a likeness. Having said this, I think the portrait is a good likeness and reveals something of Alan’s character.

The Trumpington Gallery also made the frame for the completed work. I think it complements the picture well. When Alan came to see the finished picture, he arrived in a state of great nervousness.

As we stood on the landing by the studio door, he whispered to his wife, “You go in first!” As she entered she called back, “Alan, it’s lovely!” He was a picture of relief!

Colleagues have always been kind enough to express their approval of the portrait and having it up on display in the dining hall has given me great satisfaction and pleasure. I like to think, that in a small way, I’ve left a mark and that it will be hanging, seen by future generations, long after I’ve gone.