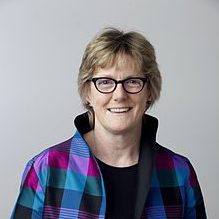 Davies is the Chief Scientific Adviser to the Department of Health.

Dame Sally Davies, DBE, FMedSci, FRS, is the Chief Medical Officer for England, the UK government’s principal medical adviser. The position was created in 1855, yet Davies, appointed in 2011, is the first woman to hold the post. In 2006, Davies established the National Institute for Health Research in 2006. This funds cutting edge research, trains and supports researchers, provides world-class research, and makes sure patients and the public are involved at every step.

As Chief Medical Officer, Davies is the independent adviser to the Government on medical matters, with a particular focus on Public Health. She also provides professional leadership for Directors of Public Health, and is the head of the Medical Civil Service.

As a clinician, Davies specialised in haematology. She is an expert in sickle cell disease, a blood disorder resulting in misshapen red blood cells which mainly affects people of African heritage. She is also passionate about antimicrobial resistance, and speaks widely on this topic at events such as the United Nations General Assembly side event in 2016.

Davies’ other key roles include:

Davies was awarded a damehood in 2009 for services to medicine, and was elected a Fellow of both the Royal Society and the Academy of Medical Sciences. She became an Honorary Fellow of Homerton College in 2016, and we look forward to welcoming Dame Sally back to Cambridge to take part in a panel discussion on 21 March, as part of our anniversary celebrations and the Cambridge Science Festival.