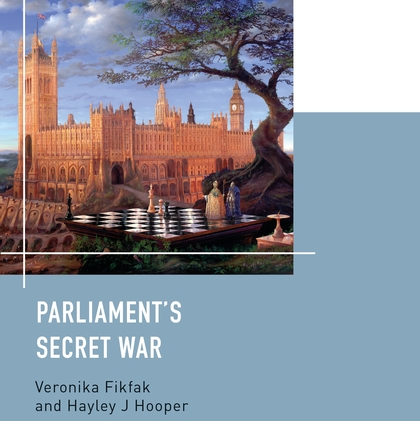 Who gets to decide on going to war?

On Monday, 30 April, Dr Veronika Fikfak and Dr Hayley J. Hooper presented their research on the application of the War Powers Convention in the UK, at the launch of their book Parliament’s Secret War.

The invasion of Iraq in 2003, and the Coalition Government’s failure to win parliamentary approval for armed intervention in Syria in 2013, mark a period of increased scrutiny of the process by which the UK engages in armed conflict. For much of the media and civil society there now exists a constitutional convention which mandates that the Government consults Parliament before commencing hostilities. This is celebrated as representing a redistribution of power from the executive towards a more legitimate, democratic institution, but as evident when PM Theresa May authorised air strikes on Syria in April 2018, its application is highly contested.

Parliament’s Secret War offers a critical inquiry into Parliament’s role in the war prerogative since the beginning of the twentieth century, evaluating whether the UK’s decisions to engage in conflict meet the recognised standards of good governance: accountability, transparency and participation. The analysis reveals a number of persistent problems in the decision-making process, including Parliament’s lack of access to relevant information, government ‘legalisation’ of parliamentary debates which frustrates broader discussions of political legitimacy, and the skewing of debates via the partial public disclosure of information based upon secret intelligence. The book offers solutions to these problems to reinvigorate parliamentary discourse and to address government withholding of classified information. It is essential reading for anyone interested in war powers, the relationship between international law and domestic politics, and the role of the Westminster Parliament in questions of national security.

Dr Veronika Fikfak is Fellow and Lecturer in Law at Homerton College, and an ESRC Future Research Leader. She holds a Magister Juris and a D.Phil from University of Oxford. Her research interests are in the fields of public law, human rights and international law. She is particularly interested in the interface between domestic and international law and is currently writing a monograph on the role of national judges in relation to international law for Cambridge University Press.

Dr Hayley J. Hooper is an Associate Fellow of Homerton College, and is the Pennington’s Student (Fellow) in Law at Christ Church, University of Oxford. holds an LL.B from the University of Glasgow, and a Bachelor of Civil Law (B.C.L.), M.Phil in Law, and a D.Phil in Counterterrorism and Administrative Law from Balliol College, University of Oxford. She previously worked as a Foreign Law Clerk at the Supreme Court of Israel, where she assisted on a number of high profile constitutional law cases. Her teaching interests include European Union Law, Constitutional Law, and Administrative Law.