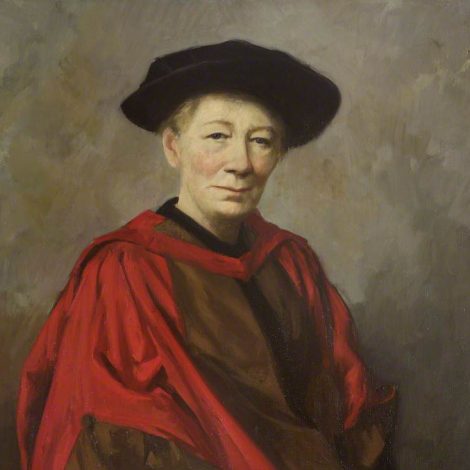 she believed that ‘gender was irrelevant to service in local government’

The portrait of Evelyn Lowe is a hidden treasure of Homerton’s art collection.

Evelyn or Eveline Lowe (1869-1956) trained as a teacher at Homerton College and subsequently became a lecturer at the College and, at age 25, became Vice Principal in 1894. She was particularly instrumental in relocating the College from London to its current site in Cambridge, the mastermind behind the logistics of what would have been a very complicated project.

Evelyn retired from this work in 1903, aged 35, when she married George Carter Lowe. She continued to have a public role, however, by becoming very involved with charitable work and the socialist movement in Bermondsey, London. George was initially a veterinary surgeon, a man sick people would often ask for animal medication, because it was cheaper; he later qualified as a doctor and went on to become a partner in a progressive Bermondsey medical practice. Meanwhile, Evelyn worked tirelessly for the Independent Labour Party.

Her portrait was painted by Bernard Dunstan, an artist best known for his paintings of nudes, musicians and Venice. Tucked away in the office of Peter Warner, Retired Senior Member and Keeper of the Roll, the portrait is a hidden treasure of Homerton’s art collection.